I love it! Although the container was broken. Its ok I have a new container but this slime smells and feels amazing 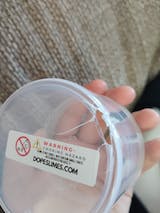 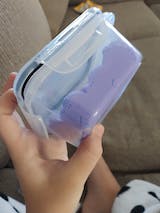 We are extremely sorry for the item(s) that got damaged during transit. Mistakes happen and sometimes packages can be mishandled...but no need to worry! Simply click the link below to start your stress-free return or exchange!
https://returns.richcommerce.co/return/new?c=dopeslimesllc

I absolutely love the free 5oz includes with every purchase of $35 or more! Sometimes you get a slime that's in the shop, and sometimes you get a new creation, which is so fun! It's alot of fun getting a surprise, high quality slime! I've gotten some slimes multiple times, which really doesn't bother me, because I love ALL of Dope Slimes' creations and I can mix them all together to have a mountain pile of slime. So, either way....wether it's a new creation, a slime sold from the shop, or even a duplicate, I absolutely love getting this 5oz slime with my order. Thank you DOPE SLIMES!!!!

So I ordered a couple of slimes and I got this one for free. I got a white slime with blue glitter and a pineapple scent it was a butter slime I’m pretty sure ( I comepared it with a butter slime and they felt the same🤪) love it I know some ppl come out with hard to place slimes from this but I knew what mine was easily because the scent was strong overall 4 or 5 stars ⭐️⭐️⭐️⭐️⭐️ Thx tho love it so much.

( sorry my sis was playing cello in the back round )

I’ve gotten some free slimes in the past, mainly normal butter slimes though they had color and one with foam beads, I’ve now gotten a red sugar scrub, clear based, and now a super stretchy, soft, holdable, almost snow butter texture with confetti pieces and sprinkles. It’s probably a bread slime it’s so puffy, inflates a lot. The sugar scrub is crunchy and when it gets cloudy, it’s barely noticeable.though when first arrived, it was hard to get out, worth it though. The foam butter was a wetter texture and the other, a purple is nice, very clay heavy, almost like the lavender memorydough. The green slime almost like, looks like it would rip, but it doesn’t. Here are the ratings. Green slime: 99/5. Purple butter slime: 5/5. Dark blue floam: 4/5. Sugar scrub: 80/5

So I ordered all floam slimes and received a cloud slime for free with my purchase. Great. The only issue I had is that it wasn’t labeled. I had no clue what kind it was. The scent was hard to place and the mix-ins were also hard to distinguish. I would just like to know what it was!